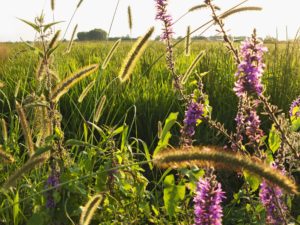 The original settlement in the area that is now Milan was located in a very promising, albeit remote, spot in the middle of a fertile and well-irrigated plain.

By the 4th century B.C. the population in the area began to grow ad Gallic peoples migrated into the Padano Plain. It was then that the city was given a name of Celtic origin that means “place in the middle”, which was transposed to the Latin Mediolanum beginning in 222 B.C., when Romans moved north to the Po River. A small and somewhat restless colony, Milan only began to develop truly rapidly during the Imperial Era.

The city was both located at the center of a network of Roman roads and was a favorable spot for farming, which was increasingly important, and so it became one of the major cities of the Roman Empire. By 286 it was the second largesurban area in the Western world by both area and population (Rome was first). 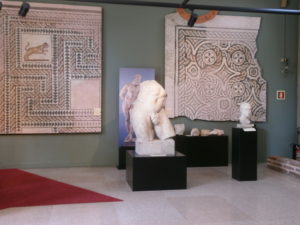 Today, the Archeological Museum is located in the spot where the far side of the imperial palace stood at that time. It also contains many of MIlan’s important Roman ruins, including one of the towers from the Circus, a large sporting complex built for chariot races.

In the 4th century A.D. Milan was prospering, even as the rest of the Roman Empire faced serious problems. Evidence of this can be found in the extraordinary work in gold that stands in front of San Lorenzo Basilica which can be seen in the Archeological Museum and the Diocensan Museum and the moving ivory plaques kept in the Duomo and the Castello Museums, which exhibit a balanced combination of late-ancient style, with references to both the imperial court and then-nascent Christian art. 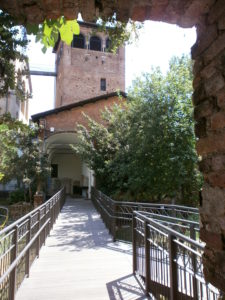 In 374, Saint Ambrose was named bishop of Milan. He was very active in both religious and civil arenas and instituted a particular form of Christianity that today is known as the Ambrosian Rite. That way, Milan began to establish an identity as a holy city. Large basilicas were built by the gate in its walls, and a religious complex began to take shape in the center of the city.

Over the course of centuries, it would became Milan’s famed Duomo, or Cathedral.

The Diocesan Museum, opened in 2001, is a good place to see the city history through works of at that date from the 20th centuries. This long ago, authentic golden age came to an abrupt end in 402, when the imperial court, spooked by the threat of Barbarian invasions, moved to Ravenna.

Today, that era’s mark on the city urban fabric can still be seen, in part in the historic  names of some of MIlan’s best known streets and piazzas, as well as in the works of art in its museums an its exceptionally evocative archeological ruins, many of them highly significant with regard to the history of Christianity.

One of the most spectacular building is the San Lorenzo Maggiore Basilica. In ancient times, this splendid church had a symmetrical layout, and it would serve as a model for the later Santa Basilica in Ravenna and others. 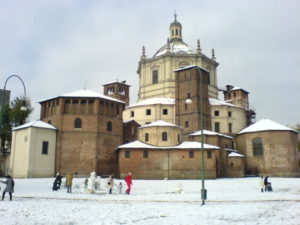 The 4th century basilicas built by Saint Ambrose, which were late renovated and expanded, are mostly Romanesque in style.

From 5th to the 7th century Milan was ravaged and sacked repeatedly by the Barbarians. Beginning in the 8th century, the city regained its footing as a religious center, due in part to the legacy of the Ambrose era. Soon it became a political powerhouse, too, under the Carolingian and Ottonian emperors.